Sports events organized by the Community Foundations in 2015

Fundraising sports events organized by community foundations are already well-known. Since 2009, they have mobilized more and more resources every year for projects the communities deem relevant.

“Each of us runs for themselves, for their families or bosses, or for money, but when you want to help, your motivation is stronger, because you know that the money you raise may support someone or an accomplishment. I would like to see more and more people participating, even if only to give an example to the young. Without sport, a nation is dying, slowly but surely”, opines Fane Tulpan, the first Romanian on Mount Everest, a member of the Mountain Rescuers Association who took part in all the semi-marathons organized by Fundația Comunitară Sibiu and supported a number of causes and organizations.

Fundraising sports events organized by community foundations are already well-known. Since 2009, they have mobilized more and more resources every year for projects the communities deem relevant.

In 2015, the 15 community foundations organized 19 sports events and raised a total amount of 1,289,307 lei from over 10,000 donors. These funds were collected with the support of 6,700 athletes and contributed to the implementation of 158 projects. 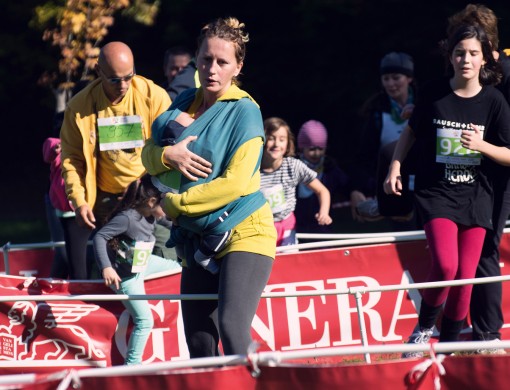 The mechanism is similar, whether the event is a Swimathon, a Semi-marathon, a Bike-a-thon or obstacle races, as in the case of Brașov Heroes. Swimmers, runners or cyclists compete to support their causes and raise money with the help of their social network accounts or the organization they represent. Companies compete for causes they already support through their CSR campaigns or for one of the organizations represented in the event. The organizing foundation builds a platform that manages donors and payments and disburses the amounts raised for each project. The fever of such sports events keeps the community together for almost four months, mostly on the month right before the D-Day.

As an organization, it doesn’t take long to get involved in a Swimathon, Semi-marathon or Bike-a-thon. Many organizations participate every year, usually with better outcomes year after year. The Unu și Unu Association, for example, helping premature babies and their parents, is a traditional participant in the Swimathon organized by Fundația Comunitară București. In 2014, three mothers and bloggers – Bogdana Dobre, Ana Nicolescu and Ana Maria Mitruș – created a team for the cause of premature babies. Because they needed another member to have a full team, they asked a famous sitcom actress, Tily Niculae, to join them. “I wanted to be close to these mothers, to fight against the medical system that hinders us and doesn’t help us overcome difficulties”, said Tily, a mother herself.

For those who run for happiness, happiness consists in running.

For a month and a half, the women trained together, exchanged hundreds of e-mails on the fundraising strategy and made lists of people they knew they could ask to donate for the premature babies. This was not in vain, as they managed to strike a record in amounts raised at the Bucharest Swimathon. Tily was the person who attracted the largest amount from a single donor at the Swimathon, a 5000 lei sponsorship from a company.

In 2015, this time supported by a team of navigators, Unu și Unu Association led the Swimathon donation race from beginning to end and managed to raise over 15,000 lei from 121 donors for the “Alo, Prematuritate” project, a call-center for parents of premature babies.

Through the Community Foundations Matching Fund, the Romanian American Foundation (RAF) provides grants that match the contributions collected by each Community Foundation from individual donors at a 1:1 ratio. The aim of this grant scheme is to promote philanthropy at the individual level by involving all community members as donors to support local development. Asociaţia pentru Relaţii Comunitare (ARC) is a strategic partner for RAF in implementing this program as an initiator of the National Community Foundation Development Program.